What are Layer Sets?

Layer Sets are a great way to control the live state of multiple layers at once. You are able to switch on or off certain layers with a single mouse click or keystroke. Layer Sets can also be triggered by the Remote Control Surface or the Show Start event.

Layer Sets are shown below the Layer Stack: 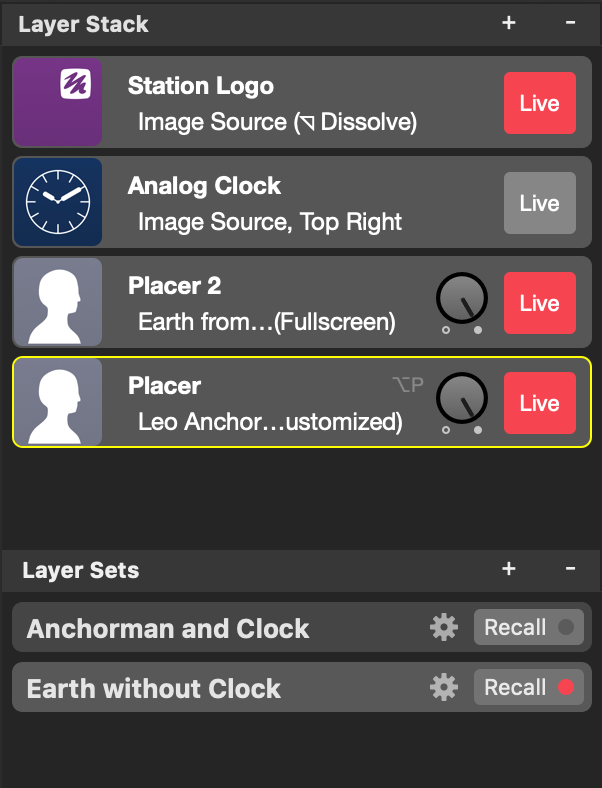 If you are happy with the current live state of your layers you can click on the “+” button in the top right corner of the Layer Sets list (below the Layer Stack). The current Layer stack live states are stored in a new set.

*Layer Sets are only controlling the live state of layers but not their content
Please note that the Layer Set will only activate or deactivate layers but they won’t restore the content or the state of a layer nor the selected Layer Variant.

*Finetuning is the better option rather than deleting and recreating.

If you have defined different Layer Sets you can recall the state of all Layers by activating the Layer Set. There are different ways to trigger a recall of a Layer Set:

*Activation Indicator turns red even if you change layers manually.
Once the current live state of all layers reflects the actions defined in a Layer Set the Activation Indicator turns red. This happens not only if you trigger a Layer Set by clicking on it but also if you manually switch on or off layers directly in the Layer Stack. Whenever the live states of the layers reflect a “result” of triggering a Layer Sets then this Layer Set gets turned on red.

When you click on the action gear button at a Layer Set you will get a popover window revealing details of the Layer Set like its name, assigned keyboard short cut, possible event triggers and the actions that are performed for each layer. In the upper part of the Layer Set configuration window, you can specify a name for the Layer Set so you can easily remember what this Layer Set is meant to do. (You can also change the Name of a Layer Set by double-clicking its name label in the Layer Set List.)

With the keyboard short cut recorder, you are able to define a certain key combination that will recall this Layer Set.

The “on Show Start” and “on Show End” options can be used to trigger this Layer Set if you click the Start/Stop Show Button in the main document window to start or stop your show.

Whenever you create a Layer Set the current live state of all layers in the Layer Stack gets captured. But in certain layer setups, you rather want to let some layers untouched if you recall this Layer Set. Or you don’t want to wait for the out transition of a layer to happen if it will get switched off by a Layer Set. Therefore you can finetune the behaviour for each layer when recalling specific Layer Set. There are four options to choose from what will happen with each layer: