The Instant Replay layer buffers the last couple of seconds of the layers below or a video source for instant replay.

Setting up the Instant Replay layer

First you need to think about what do you want to be able to replay: You can select either “Layers Below” or “Video Source” for the Source option in the Content section of the layers parameters.

The benefit of choosing “Layers Below” is that the complete content of all layers below the Instat Replay layer will be captured. E.g. if you have a Video Switcher, the switched output will be captures. Thats why we recommend to put the Instand Replay layer just above the video productions layers in order to have a clean signal (no other graphics): 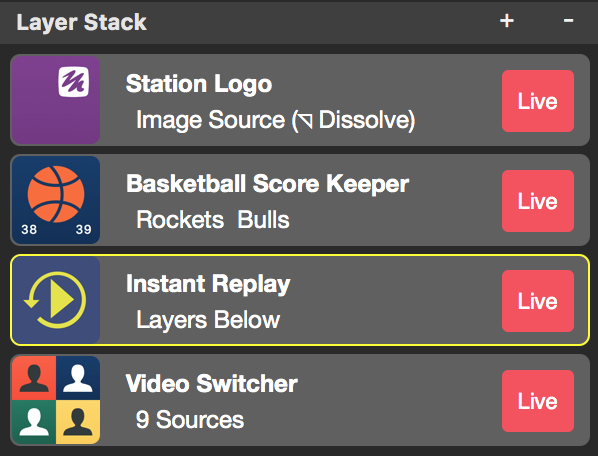 If you choose to capture a certain “Video Source” you need to specify this source with the popup below. Now you can replay video content independently from the layer stack.

The “Buffer” field let you control how much video footage in seconds should be buffered for instant replay.

!How much time can be buffered is depending on your graphic card!

The video buffering happens in the graphics card only. This means that you need lots of memory inside your graphics card rather than RAM in your Mac. Unfortunately its hard to determine how much video RAM is available to mimoLive because macOS does a lot of magically housekeeping so we already successfully stored 10 secs of 1080p 30fps video frames (=2.5GB) in a 2GB video card. Even this is possible its not recommended because it certainly will have a side effect on the rendering engine in mimoLive.

In the Animation section you can specify how the replay should appear and disappear in the video. You can choose from several animations like Dissolve, Swipe, Page Curl, Push Horizontal, Push Vertical or even a Cut. Put in the transition duration in seconds into the Duration input field.

There is a Replay Indicator that will be shown once the replay is in progress. Specify the video source that should be shown in the “Appearance” section. The graphic can be positioned freely on the screen either by direct manipulation in the layer preview area or with the coordinates in the Geometry section.

In order to capture the selected content the Instant Replay layer needs to be live all the time. While the layer is live to captures the current video frames into a buffer. How much video is already in the Buffer is indicated by the progress bar in the layers Preview area. When ever there is a scene that could be interesting for the audience to see as a replay the operator can press the “Buffering Stop” button to playback the scene whenever the moderator announces it, or he can press “Replay Start” which will start the plack back instantly.

Once the replay operation should end the operator needs to press the “Replay Stop” button. Now the buffering of the video content starts again.

Because this is a very intense operation it makes sense to create a Remote Control Surface for this task. Please keep in mind that you are able to create multiple control surfaces for different tasks and use them on different devices at the same time.

The buttons are quite the same as described above in “Controlling the Instant Replay layer”.