The Video Switcher layer in mimoLive can take up to 9 video sources and switch between them with either a cut or dissolve transition. Because in mimoLive the input sources are independent from the program output it dosen’t matter which pixel resolution or fps the individual sources have: The Video Switcher layer can transition between them anyways.

Setting Up The Video Switcher Layer

First of all you should setup the Source Count in the Control section of the layer settings. If you are using less cameras this will help to reduce the controls and buttons in the user interface.

Then you can assign the video sources by dragging them onto the layer in the Layer Stack or select them in the Content section of the layers settings.

By default the preview of the layer shows the names of each source for better orientation. You can override the names with the “Source Name“s text input fields.

A Transition Duration input field let you control the time it takes to perform the dissolve transition.

There are optional Background image inputs that are needed when running a Virtual 3D Studio.

Controlling The Video Switcher By Buttons Or Keyboard 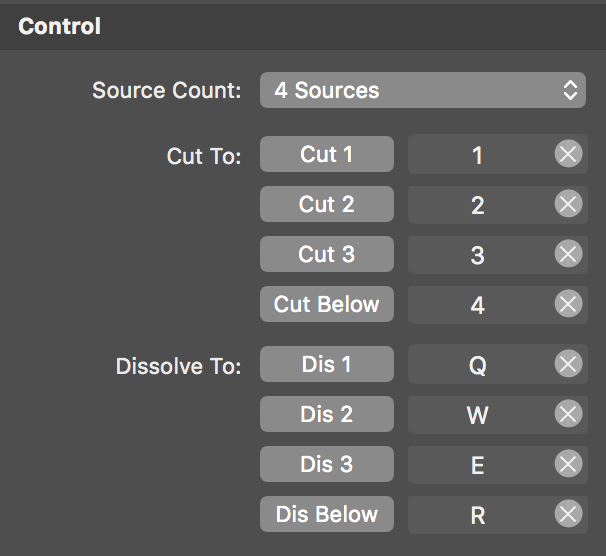 The Video Switcher layer has a bunch of buttons that will control the output. The first ones do a Cut to the specific camera whereas the following will do a dissolve transition. It is helpful to assign Keyboard Shortcuts for each button you need so you can access this feature anytime.

You can use the mouse to click on the multiview preview to switch to a certain source. If you do a single click the video switcher will do a cut to the new source. If you do a long press (keep your mouse button down) then a dissolve transition will be performed. Because the Video Switcher is a very intensive task and should be performed separately from controlling mimoLive in general we implemented a rich Remote Control Surfaces for it. There are basically two options for the standard layouts in the Remote Control:

Controlling the Video Switcher By The Multiview

Using Syphon to transmit the Preview

Currently in mimoLive the multiview preview of the Video Switcher layer with all your assigned sources will be replaced if you select a different layer. Then you won’t see your sources anymore and can’t keep track of the content. With the “Transmit Preview” in the Syphon section of the layer settings you can get the preview with the multiview into another app via Syphon. In this 3rd party app you can constantly display the multiview of the Video Switcher layer regardless of its selection state in mimoLive. If your sources are AXIS IP cameras you can use the AXIS Control section to configure the IP Numbers for them and enable a remote control for them in the multiview preview. There are two modes available:

By holding down the alt key you can switch to the oppose mode. Eg. if you have setup the Mode to “Click To Center” then the alt key will change the mode to “Drag To Move” temporarily.

*In any case you need either shift or alt keys to control the AXIS cameras because without the modifier keys the control would get in conflict with the general mouse control of the Video Switcher layer.